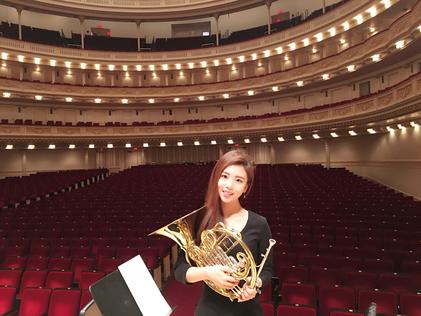 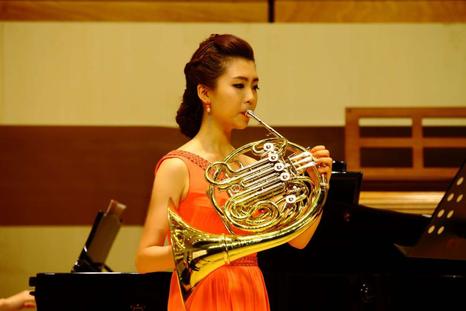 Dr. Mimi Zhang is currenly the principal horn of the Symphony Orchestra of Central Conservatory of Music in Beijing. She has performed with the American Ballet, the Princeton Symphony Orchestra, the Princeton Pro Musica, the New England Symphonic Ensemble, China’s Orchestra Academy, Macao Symphony Orchestra and the Beijing National Centre for the Performing Arts orchestra in their recently completed National Grand Theater. She has also performed in Europe and South Africa. In the United States, she has performed at Carnegie Hall, the Lincoln Center for the Performing Arts in New York City, the Kennedy Center for the Performing Arts in Washington D.C., the Los Angeles Music Center and the Disney Concert Hall in Los Angeles. Dr. Zhang has been invited to give recitals and master classes at Boston University College of Fine Arts, Beijing Central Conservatory of Music, Tsing Hua University, Xiamen University, and Qingdao University. In 2015, Dr. Zhang was a special guest at the Sinovision channel’s New York Lounge television show. She has also performed at the Met Gala in New York with singer Rihanna. In the same year, Dr. Zhang has founded the International Music Festival in New York, Boston, New Haven, Philadalphia, and Washington DC.


Born in Beijing, China, Dr. Mimi Zhang began her musical career at age of three on the piano. Throughout her education, she received multiple awards and scholarships. At the age of eight, she won the China National Young Artists Competition. In 2005, she won the Spotlight Competition, and performed as a soloist in Los Angeles Music Center. In 2005 and 2006, she attended the Aspen Music Festival as a Fellow. In the summer of 2009, she received a fellowship from the American Institute of Musical Studies to perform in Austria. She was a Chamber Artist at the Norfolk Chamber Music Festival in the summer of 2011. In 2016, Dr. Zhang was invited to the International horn conference in China as the soloist and competitions’ judge.

Dr. Mimi Zhang has performed  in prestigious concerts halls around the world including -

Stefaniensaal and Eggenberg Palace in Austria

The National Centre for the Performing Arts in Beijing